Does world-class bird watching, canopy exploration and tropical cloud forest sound exciting to you? If so, you’ll love Monteverde, one of Costa Rica’s best ecotourism destinations. Shrouded with dense clouds, the forests of Monteverde are always moist, green and full of life. Exotic and rare bird species such as the resplendent quetzal and emerald toucanettes thrive in this environment. For those looking for faster pace, check out Costa Rica’s best canopy zip lines or take a hike through the canopy on a hanging bridges adventure. A two to three night trip to Monteverde is just right for most visitors and a great way to enhance your Costa Rica vacation!

Set on a hillside overlooking Monteverde and beyond, El Establo Mountain Hotel is the largest hotel in town. Between enjoying the wonders of Monteverde, guests of the eco-resort can enjoy amenities such as a heated swimming pool, full-service spa, tennis courts and much more. El Establo provides shuttle services throughout the property and guests can also walk to nearby shops and restaurants. Cloud forest backs the eco-resort and there are tropical gardens throughout the property, so while it is a larger hotel, you’ll always feel at one with nature.

Sample Itinerary
Starting at $470 per person* 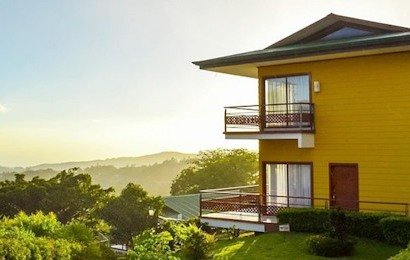 Sitting on a hillside overlooking the village of Santa Elena, the Ficus Hotel provides sweeping views of the cloud forest and rural Costa Rica. Ficus offers guests affordable rooms with quality amenities, making it a fantastic base for your Monteverde adventure. Establo provides shuttle services throughout the property and guests can also walk to nearby shops and restaurants. Cloud forest backs the eco-resort and there are tropical gardens throughout the property, so while it is a larger hotel, you’ll always feel at one with nature.

Sample Itinerary
Starting at $441 per person* 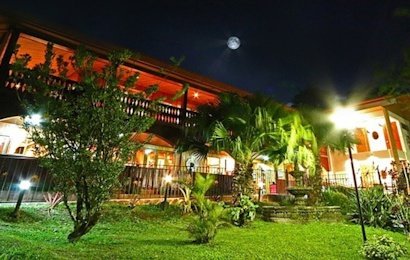 Located outside of town near the famous Monteverde Cloud Forest Reserve, Hotel Fonda Vela is a beautiful eco-lodge for your stay in the cloud forest. The lodge provides an incredible natural experience with trails through the cloud forest and gorgeous gardens. You won’t find any night clubs in this neck of the woods, but you will find a charming restaurant with tropical drinks and wine. The tastefully decorated rooms at Fonda Vela feature local arts, and the polished hardwoods are stunning. Fonda Vela will make an excellent base for you to explore the wonders of Monteverde!

Sample Itinerary
Starting at $492 per person*

Monteverde is Home to Rustic Eco-lodges and Eco-friendly Hotels

A trip to Monteverde is a unique addition to your Costa Rican vacation. Monteverde is the land of cloud forest mysteries and rustic ecolodges. You won’t find any all-inclusive resorts or cookie cutter corporate hotels in this town. While several lodges have been updated recently with modern comforts and amenities, none will be accused of competing with the JW Marriott! Hotels such as Hidden Canopy Treehouses and the Belmar Hotel will provide the perfect ambiance for romantic eco-luxury. El Establo, Fonda Vela, Ficus Hotel, and Poco a Poco are all good midrange hotels for couples and families alike. The Trapp Family Lodge is the closest to the cloud forest reserve, providing quiet evenings and comfortable rooms. Save money on your hotel by booking a package deal today!

Ecotourism Activities & Things to do in Monteverde

Monteverde offers visitors a plethora of ecotourism activities to choose from! The world famous Monteverde Cloud Forest Reserve is a beautiful place to hike through the highland jungle. The reserve is home to exotic bird species, amazing scenery, mammals such as monkeys, sloths, and even some large cats. Monteverde is also home to some of the best canopy zip lines and hanging bridges in the world. Imagine soaring through the forest like a bird or hiking through the cloud-shrouded treetops! Monteverde is a rural area only accessible by dirt roads, so the local culture remains strong. You can learn about and embrace the culture on coffee tours, the El Trapiche (sugar processing) tour, or visit the Woman’s Artisan Cooperative. 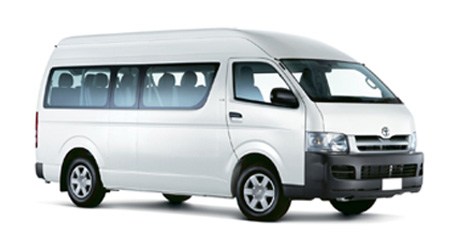 Getting to Monteverde can be a challenge on its own. The roads leading to this rural area are unpaved, not well-marked and can be a little frightening with significant drop offs just to the side of the road in some sections. While it is entirely possible to drive there and done every day by tourists and locals alike, most visitors opt for provided transfers over a rental car. We provide both options and also offer either private or shared shuttle transfers to Monteverde. Private transfers are available from anywhere in the country on your schedule. Shuttle transfers are more affordable but shared with others and on a schedule. Note that most visitors opt for a combination land and boat transfer between Arenal and Monteverde.

Getting around Monteverde is simple with a rental car or not. Most tour operators offer transportation to and from the activity at no additional cost. Taxis to get around town are affordable and readily available.

Which destinations should I combine with Monteverde on my vacation?

Monteverde is a great destination for ecotourists to add to their Costa Rica vacation as it combines so well with so many other destinations. Some of the most popular include Arenal Volcano, the beaches of Guanacaste and the Central Pacific.

Arenal Volcano (around 3 hours if taking the land boat land transfer across Lake Arenal) is one of the most popular destinations to combine with Monteverde. Visitors will find lush, colorful scenery with a massive conical volcano providing a magical backdrop to everything in the area. Arenal is the adventure capital of Costa Rica with everything from whitewater rafting to canyoning down rainforest waterfalls, to horseback riding through the countryside. Those in search of wildlife will not be disappointed as safari floats on the Rio Penas Blancas or riverboat safaris at Cano Negro Wildlife Refuge can provide amazing experiences with exotic and rare animals. Of course, you can’t forget the world class hot springs after a day of adventure!

Guanacaste beaches such as Tamarindo (approximately 3.5 hours), Flamingo (around 3.5 hours) or Samara (around 3.5 - 4 hours) are all excellent destinations to combine with Monteverde. Tamarindo is a cool little surfside village offering swimming and surfing beaches and a convenient downtown with shopping and nightlife. Flamingo and Conchal are near Tamarindo but in a quieter setting and only swimming beaches. Samara and Carrillo are further south on the Nicoya Peninsula. This area is off the mainstream tourism path with beautiful beaches and a great local vibe.

Manuel Antonio on the Central Pacific is a beautiful beach and rainforest destination. The national park is among the top attractions in Costa Rica, brimming with exotic and rare animals. The beaches of Manuel Antonio are simply gorgeous with sections for swimming or surfing. Manuel Antonio also offers more activity options than any other beach destination in the country. If you’re looking for a similar beach and wildlife experience, but less touristy, check out Dominical or Uvita & Marino Ballena.

How much time should I spend in Monteverde?

Most visitors stay 2 - 3 nights. Keep in mind that this area is typically cool, damp, rainy, and at times windy. Combined with the rustic lodging, we normally recommend two nights.

Will I be safe?

Monteverde is a safe area with little to no violent crime. Petty theft crimes of opportunity are more common. Prevention such as not leaving valuables in your car, locking valuables in a hotel safe, and not leaving anything of value unattended will significantly reduce your odds of becoming a victim.

Monteverde is a cloud forest area so you should expect clouds, rain, and cool weather. While some seasons are drier than others, you should be prepared for rain any time of the year. Daytime temperatures are usually in the mid-70s and about 15 degrees cooler at night. This area is susceptible to even cooler weather when storms are present, so prepare with a hat, long pants and shirts and quality well-ventilated rain jacket.

Why are hotels more expensive, but with fewer amenities than other places in Costa Rica?

Everything costs more in Monteverde due to the location and associated transportation costs as well as maintenance in such a damp area. Hotels in Monteverde have to pay more to build and maintain than places with stable weather and lower humidity.

When is the best time to visit?

January through April are the driest months, but most people visit Monteverde for the jungle which is lush and green when there is more precipitation.

Monteverde has grown over the last few years, especially when compared to the 1980’s when Monteverde became famous as a birdwatching and canopy exploration destination for ecotourists. While some conservationists would say that there probably are more tourists than there should be, the crowds are held at bay by the dirt roads and weather patterns. The local population is around 6,500 and with tourists, that number can swell to around 8,500 in the busiest seasons. Maybe a better term would be "ecotouristy", which isn’t such a bad thing.

Monteverde is in the north central region of Costa Rica at the northern most edge of the Puntarenas Province. The village is about 3.5 hours drive and 145 km northwest of San Jose Airport and 111 km or 3 hours southeast of Liberia Airport.