Grecia is a countryside pueblo with many small private farms located 22 kilometers northwest of Alajuela. Most notably, Grecia is known for the red roofed Catholic Church in the town center which was for the most part packaged and shipped in from Belgium in the latter end of the 19th century. It is also known as the Cleanest little town in Central America, due to an award given a few years back. This award can actually be viewed at the Casa de Cultura, which is a small museum that has stored information and Spanish Colonial artifacts from the area over the last couple hundred years. 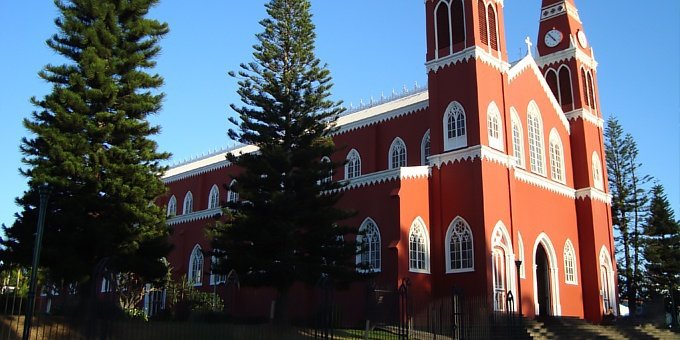 Don't blink as you are driving through as you might miss the World of Snakes. This is a well-managed endangered snake breeding program which allows visitors to observe over 40 species which are housed in large cages.

Many consider the Central Valley to be the most comfortable climate in the world with temperatures usually hovering in the upper 70s during the day and lower 60s at night. The rain season here runs from May through November, though the heavy rains are generally during September and October.

Visitors should pack shorts, tee shirts, appropriate shoes, rain gear, sun block. It is also advised to bring at least one pair of pants and a long sleeve shirt.

Fun Fact: Las Cataratas de Los Chorros waterfalls are located approximately 5 kilometers south of town. Visitors can swim in a hole beneath the 2 falls and there are picnic tables as well.