Although Costa Rica has been inhabited since about 5000 B.C. by the Incas from South America and the Aztecs from North America, Costa Rican culture is predominantly influenced by Spain.  Christopher Columbus “discovered” and named Costa Rica in 1502.  Costa Rica actually means “rich coast” as Christopher Columbus believed the land to be filled with precious metals.  Although the Spanish government and the Catholic Church played a huge part in the cultural development of Costa Rica from that point on, the influences of the Incas and Aztecs is still strong in Costa Rican customs and folklore. 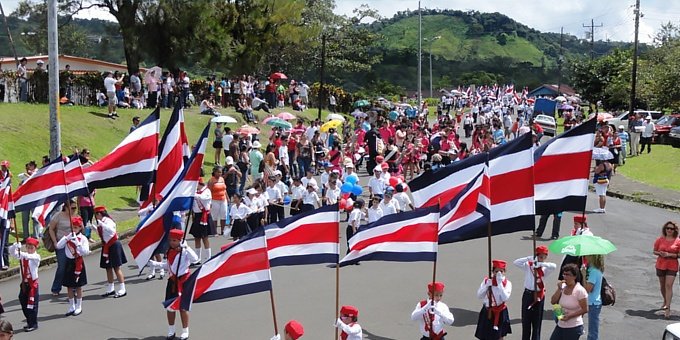 Costa Ricans, better known as “Ticos” are very welcoming and friendly.  Their favorite phrase is “PURA VIDA”, which signifies their belief in “pure life” or a people full of happy life.  Costa Ricans were recently named the “happiest people on earth” according to a recent study that measured an overall satisfaction with quality of life!  This is not surprising considering this is a country that boast : “more teachers than policemen” and where the army was abolished in 1949.

Democracy is the form of government in Costa Rica, with elections held every four years.  Even the smallest villages have electricity, drinkable water, telephone service, and free and compulsory education through high school.  Costa Rica boast one of the highest literacy rates in the Western Hemisphere, and many students continue their education at universities. Costa Ricans enjoy a good health care system run by the State.  Costa Rica is also considered to be one of the most stable nations of Latin America, which in a large part is due to the high standard of living and quality education.  All these factors have led to a multicultural society due to the amount of visitors who feel welcome in Costa Rica from other countries.  The Political Constitution guarantees  “equality according to law, for citizens and foreigners”.

Ticos naturally have a love of music and an enthusiasm for dancing!  The salsa, meringue, and reggae are popular rhythms and play a huge part in the local fiestas found throughout the country.  But Costa Rica also boast a National Symphonic Orchestra founded seven years ago which also spawned the creation of the Youthful Symphonic Orchestra, and the National Symphonic Chorus, the National Lyric Company, the General Direction of Bands, and the Castella Conservatory.

Costa Rica also has a National Theater Company and a National Theater Workshop.  A professional career in theater is taught at two state universities and workshops are held in independent houses, and state auditoriums.  Cinematography is important to Costa Ricans and they go to the movies often.

Futbol (soccer) is played everywhere!  Smaller villages are often built around the soccer field with everyone turning out in the evenings to watch the teams play.  The National Selection has been in three World Championships in 1990, 2002, and 2006.  The Costa Rican team has a very good start in the current World Cup qualifying matches!  The enthusiasm for the game is contagious, and if you are driving by a local game (usually being played in the center of small towns in the evenings), stop and enjoy the excitement!

The official religion of Costa Rica is Catholic, but there is total freedom of worship.  Much of the population on the Caribbean coast is protestant as here the descendants are mostly from Jamaica. The Costa Ricans are not strict in their practice of church doctrine and accepting of others religious beliefs. National Geographic has an ongoing study of the Costa Ricans living in the Nicoya Peninsula as this is one of the 5 areas o the world where people live the longest and healthiest lives.  One aspect they have identified as being partially responsible for their longevity is their “spiritual” life.  Costa Ricans have a happy, friendly, and spiritual society which many countries are studying and learning from. This in part is the reason why so many people from other countries have come to Costa Rica to retire.