April is the hottest month of the year on the Pacific side of Costa Rica and warmly welcomed by visitors coming down for Easter vacation.  This is one of the busiest months of the year for tourism as it is not only a popular time for foreign visitors, but also the most traveled upon time for locals. 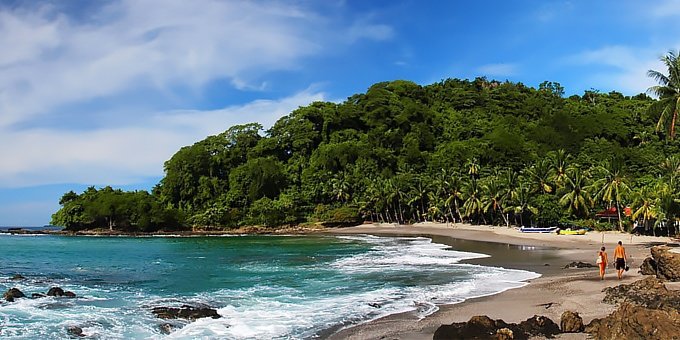 As in March, there is little rain in Costa Rica during the month of April.  This is one of the driest months of the year and one of the best times to travel in Costa Rica.  With the great weather and as Easter sometimes falls in April, this can be a very popular month to travel to Costa Rica and difficult time for reservations.

The Northwest Pacific beaches of Costa Rica are very dry in April.  Temperatures usually reach the low 90s in the day.  Precipitation is uncommon and when it does occur, is generally a passing shower during the night.

The Central Pacific enjoys another month of great weather in April.  Daytime highs usually reach the lower 90s.  Rains occur, though not frequently and usually overnight.

April is one of the driest months on the Caribbean side.  Daytime temperatures should be expected to reach the low 90s.  Rains do occur sporadically, but usually pass quickly.

The Central Valley and Arenal enjoys near perfect weather in April.  Daytime temperatures usually reach the upper 70s to low 90s.  Rain occurs, but usually overnight in the form of passing showers.

As Easter usually occurs in April or at the very end of March and there is great weather, April is a very busy month in Costa Rica.   Advance reservations are highly recommended, particularly with accommodations of reasonable quality.  The better hotels are almost always reserved solid 4-6 months in advance.

High season prices prevail in April.  During the week of Semana Santa or Easter week, prices are usually at Peak Season rates.  Many hotels offer Early Reservation Discounts in the Low Season prior, so you can often save by reserving early.