July is the most popular month for families visiting Costa Rica.  Many families travel in the beginning of the month, taking advantage of the Independence Day holiday in the United States, but this is also a popular time for Europeans on extended holiday.  Don’t be fooled, while July is considered the Green Season, this is one of the busiest and most reserved months of the year. 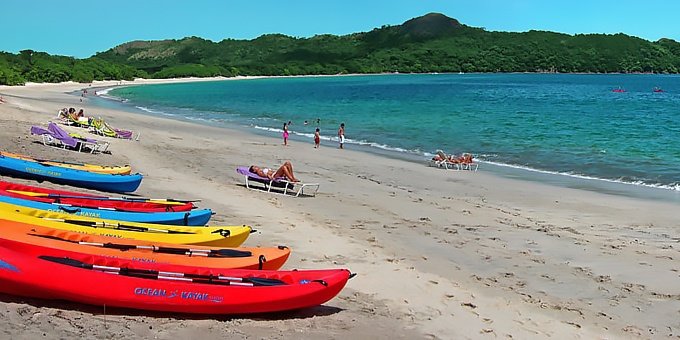 July can be a strange month for the weather in Costa Rica. Though it is the Green Season, there is often a mini Dry Season, locally known as veranillo or little summer, from the beginning of the July and lasting through most of August. Temperatures are fairly constant with other months as elevation has more effect than seasonal patterns. Generally, it is a good idea to carry rain gear with you during the month of July, particularly in Caribbean areas.

The Northwest Pacific coast is still usually pretty nice.  Daytime temperatures are normally in the upper 80s to lower 90s.  Rain can occur, but usually only happens in the late afternoon or early evening.

On the Central Pacific coast, rain can usually be expected in the late afternoon and evening. Temperatures are usually in the mid to upper 80s.

July is hot and steamy on the South Pacific coast and Osa Peninsula.  Day time temps usually reach the low 90s.  Hard rains occur practically every day in the late afternoon, but the mornings and early afternoons are still usually beautiful.

The Central Valley and Arenal has the usual comfortable upper 70s temperatures.  The mornings are generally nice with showers developing in the late afternoons.

July is becoming widely considered as High Season due to the good weather and high number of families traveling.  Early Booking Bonuses are offered by some hotels, so you can still save money by traveling at this time of the year if you reserve far enough in advance.  Last minute reservations at quality accommodations can be difficult during the first two weeks of the month.

You can expect to save around 10-20 percent off normal high season pricing and our company often offers special deals for advance reservations.  Please inquire if you would like to receive information on any of the promotions we offer.

July 25 – Dia de Guanacaste- celebration of the annexation of Guanacaste from Nicaragua in 1924. Traditional bull fights, parades, music, cattle and horse shows and rodeos are very festive and fun!