June is rapidly becoming one of the most popular months to visit Costa Rica.  Wedding Season is in full swing, college graduates are ready to celebrate and the kids are getting out of school for summer break.  While the beginning of the month is a little slow, things heat up quickly by mid-month! 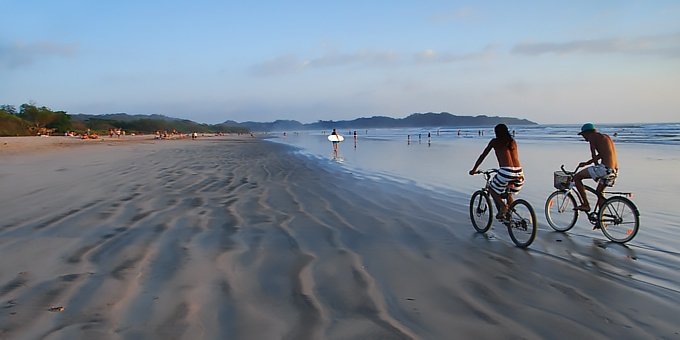 Most of Costa Rica is in the beginning phase of the rainy season (or green season) in June.  As with all months, the temperatures remain fairly constant with temperatures more determined by the elevation than time of year.  Therefore areas such as San Jose will be about 10 degrees cooler than lowland coastal areas, and higher mountain elevations 20 or more degrees cooler.  It is a good idea to keep raingear handy in all parts of Costa Rica during the month of June, but especially in the Caribbean coastal areas.

The northern Pacific coast will see a little rain in the afternoon or early evening hours of most days. Temperatures in this area remain high (up to the low 90s), so the afternoon rains can be a welcome relief.

The Central Pacific coast is still pretty warm with temperatures normally in the upper 80s to lower 90s.  The rains here are a little more consistent.  The mornings are usually nice with sunny skies and then as the day progresses, clouds move in and give way to late afternoon showers which generally last an hour or so.

The south Pacific coast and the Osa Peninsula are hot and steamy in June.  But again, days will usually start out with sunshine and temperatures will rise into the 90s with the welcome cooling rains starting in late afternoon and evening.

The Caribbean coastal area will have the afternoon and overnight showers, but usually not continuous rain all day. The temperatures can get high and with the humidity will seem even higher. But you will be able to cool off on the beautiful beaches as days usually start with some sun.

The Central Valley and Arenal areas of Costa Rica can usually expect clear morning with late afternoon showers. Temperatures will usually be in the upper 70s in the day.

Although green season traveling is becoming much more popular, you can still enjoy discounted pricing in June. The best deals are generally offered as Early Booking Bonuses, so it is not advised to wait until the last minute to make reservations as it could become more difficult and expensive than anticipated.  It is also important to mention that the best hotels and resorts still sell out frequently in June, especially during the latter half of the month.

Green season pricing is usually 10-25 percent below high season pricing and our company often offers special deals.  Please inquire if you would like to receive information on any of the promotions we are offering.