March is a great time to travel nearly anywhere in Costa Rica.  The weather is usually nice on the Caribbean side and practically perfect on the Pacific side as well as all inland destinations.  This is also Spring Break time and many visitors come down in anticipation of great weather after a cold winter up north. 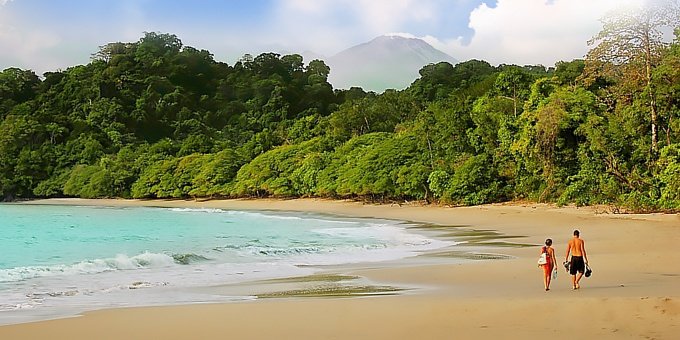 Costa Rica is well into the dry season by March.  The Pacific side has been dry for some time by now and even the Caribbean side dries out. With the great weather, March is one of the most popular months to travel in Costa Rica.  You can plan on lots of sunshine and warm to hot temperatures in most of the country, with cooler temperatures in the higher elevations. Although it is always good to have some raingear packed, you probably won’t need to unpack it!

The Northwest Pacific beach areas are very dry in March.  Temperatures are generally in the low to mid-90s.  Rains are practically nonexistent.

The Central Pacific enjoys another month of great weather in March.  Daytime temperatures will be in the upper 80s to lower 90s.  Rain can occur, but rarely during the day.

The South Pacific also has great weather in March.  Temperatures during the daytime are usually in the lower 90s.  Rains occur, but mostly at night.

The Caribbean side of Costa Rica begins to dry a little in March.  Daytime temperatures go back up to the lower 90s.  Rains still occur, though much less frequently and usually limited to showers in the late afternoon or evening.

The Central Valley and Arenal have great weather at this time of the year.  The temperature will be in the upper 70s to low 80s.  There will be a little rain, but usually only overnight.

With the cold weather in many U.S. northern states and Canada, as well as Spring Break, falling in March this is one of the most popular months to visit Costa Rica.  March is still in full high season and hotels book months in advance.  Advance reservations are not only recommended, but mandatory for desirable hotels.  Most accommodations of reasonable quality are reserved solid 4-6 months in advance at this time of the year.

High and peak season prices should be expected in March. Some accommodations offer Early Reservation Discounts which can be taken advantage of.  Please contact us if you would like further information on these discounts.

March 14 - the 2nd Sunday in March in San Antonio de Escazu- a parade of handmade and hand-painted ox-carts, traditional costumes, dancing, and food.

Beginning of Semana Santa – Holy week marked by religious processions and masses. After Thursday, basically, nothing is open until after Easter (not even public transportation).