Located in the Northern Lowlands between Ciudad Quesada and the Nicaragua border, Boca Tapada is far from the beaten tourist path. This is an area that true eco-tourists embrace for its natural beauty and tranquility. It is also an area of significant agricultural importance. 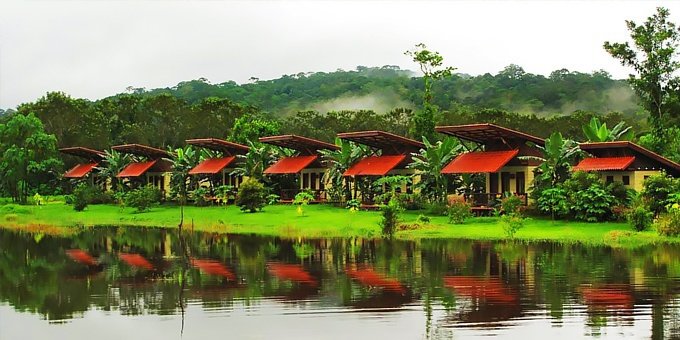 In 2005 the Costa Rican government declared the region surrounding Boca Tapada as the Maquenque Wildlife Refuge and Biological Corridor, allowing the residents to maintain their properties, but placing special development restrictions in order to maintain the fragile ecosystems of the area.  The refuge is planned to eventually be transformed into a national park which will span from the Rio San Carlos and Rio Sarapiqui all the way up to the Rio San Juan at the border.

Within the Maquenque Wildlife Refuge, Boca Tapada is a primary nesting area for the endangered Great Green Macaw.  This is one of the few areas these majestic birds can be observed regularly.  The macaws feed on Almond trees (Dipteryx panamensis), which are common to the area, but nearly as endangered as the birds that eat their seeds.

In addition to the macaws, over 400 other species of birds have been identified in Boca Tapada including Sunbittern, Roseate Spoonbill, Jabiru, Green Ibis, Muscovy Duck, Agami Heron, Keel-billed Toucan, and Great Curassow.

It’s not just a birdwatching destination though; there are actually many species of mammals, amphibians and reptiles.  The rainforests surrounding Boca Tapada are home to sloths, white faced monkeys, howler monkeys, pizotes and even wild cat species such as jaguars. Various frog and snake species can be observed on guided night hikes along designated trails.

Visitors to the area will pass by many farms in a true rural Costa Rica setting.  In addition to cattle, the farms produce pineapples, bananas, heart of palm, plantains, and yucca.

If you are planning a vacation to the Boca Tapada area, you should plan for at least two nights.  It takes a bit of an investment in time to reach the area as well as a reliable 4x4 vehicle.  Once you reach town, there are several ecolodges including Maquenque Lodge, Laguna de Lagarto Lodge, and Pedacito de Cielo Ecolodge, whose name literally translates to little piece of heaven, or ask our travel specialists to  help you choose the best option for your vacation.

This area is true to its name of a rainforest, with a fair amount of rain all year long. The annual average temperature is 79° and February through April are the driest months, whereas July is the rainiest by far.

Remember to pack comfortable lightweight and light colored clothing, a light jacket, raingear, insect repellent and sting creams, walking or hiking shoes to explore, and a camera with plenty of batteries and memory.

Fun Fact: The exotic Dusky Antbird and the Rufescent Tiger-Heron are among the species regularly spotted while bird watching in Boca Tapada.