There are few places in the world that can rival Costa Rica for birdwatching. Over 850 species of birds have been identified in this small country. This is due to the varied habitat and twelve distinct climate and life zones which range from mangrove to cloud forest and everything in between. The following are some of the more notable locations for Costa Rica birdwatching by region. 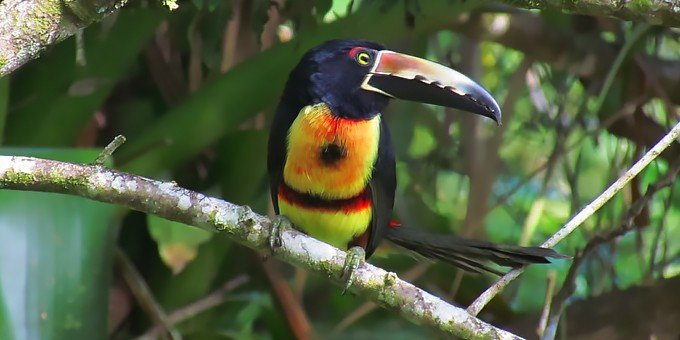 The Northern zone of Costa Rica is excellent for birdwatching. More notable locations include the Sarapiqui region, Cano Negro, San Lorenzo, Tenorio National Park and Monteverde. The northern Sarapiqui region is home to numerous species, though most notably Great Green Macaws and Keel-Billed Toucans. Cano Negro is a great place to observe waterfowl species such as Roseate Spoonbills. Tenorio National Park is an excellent location to observe Trogons, Toucans and Honeycreepers. Monteverde Cloud Forest is world known for highland species such as Resplendent Quetzals, Bellbirds and Emerald Toucanettes.

The Northwest Pacific as a whole is not the greatest region in Costa Rica for birdwatching, though there are a few pockets that contain excellent birdwatching opportunities such as Palo Verde National Park, Cabo Blanco National Reserve and Santa Rosa National Park. Palo Verde is regarded by many to be one of the best locations in the world to observe migratory waterfowl. Cabo Blanco is located on the southern Nicoya Peninsula and is home to numerous species including the Scarlett Macaw. Santa Rosa is one of the least visited parks in Costa Rica, but great for observing Parrots, Parakeets and various waterfowl species.

The Central Pacific coast of Costa Rica is a great area for birdwatching. Carara National Park, located north of Jaco, is a great location for observing Scarlett Macaws and some 400 other species of birds as it extends from near sea level to over 5,000 feet in elevation. Manuel Antonio National Park is a good location for spotting Parrots, Parakeets, Toucans and waterfowl.

The South Pacific coast of Costa Rica is excellent for birdwatching. Finca Baru Wildlife Refuge is a great place for visitors that do not have the time for Corcovado as it has most of the same species, but much more conveniently located. Corocvado National Park, located on the Osa Peninsula, is an amazing destination for birdwatchers as it is considered one of the most biologically intense places on the planet. Here you will find everything from the Harpy Eagle to Scarlett Macaws to Pelicans.

The Caribbean coast is another great destination for birdwatchers. Some of the top locations include Tortuguero National Park, Cahuita National Park and Gandoca Manzanillo Wildlife Refuge. All three are great locations for various waterfowl species, Keel-Billed Toucans and Oropendolas.