Similar to September, October can be one of the wettest or most rewarding months to visit Costa Rica, depending on where you are visiting.  By October, you will practically need scuba gear to breathe along the South Pacific coast!  However, the Caribbean side is taking in the sun as they enjoy one of their best months of the year. 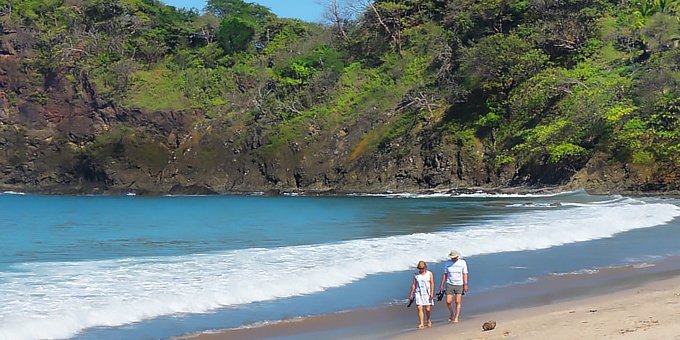 October is an odd month for weather in Costa Rica with the Pacific side receiving the heaviest rains of the year and the Caribbean side enjoying the best weather of the year.  The Temporales del Pacifico continue to plague the South Pacific coastal region with heavy rains that can last all day. But the people of the southern Caribbean coastal region (less than 100 miles to the east) are enjoying their sunny dry weather!

The Pacific Northwest is the driest area on the Pacific coast.  Temperatures here are the lowest of the year, averaging in the mid 80s during the day.  The rains are usually limited to the late afternoons, but can occur at any time.

The Central Pacific receives a lot of rain in October.  Heavy rains are present most afternoons and can even last all day at times.  Day time temperatures are usually in the upper 70s to lower 80s.

The South Pacific is the wettest place in Costa Rica in October.  Most lodges are closed for the month.  Daytime highs will be in the mid 80s. Rains can last for days at a time.

The Caribbean side of Costa Rica experiences the best weather of the year in October.  Day time highs will be in the 90s and skies will be mostly sunny. Evening showers are possible, but not the norm.

The Central Valley and Arenal experience weather patterns similar to the Central Pacific in October.  Rains can be heavy and daytime temps are usually in the low 70s.

October is the heart of the green season on the Pacific side and therefore easier to get a good room at a good price than in other seasons.  The majority of quality Caribbean side accommodations are booked solid months in advance due to the great weather.  Despite the weather on the Pacific side, the best hotels and those that offer great Early Booking Deals can be at or near full occupancy.

Most Pacific side hotels offer very good green season pricing at 20-30 percent off of high season rates.  Many hotels also offer Early Booking Deals with additional discounts or free nights for advance reservations.  Please contact us if you would like more information on these deals.

October 10- Carnival- similar to “Rio” in the streets of Limon- celebrates Columus arrival-culminates on the 12th (Columbus Day).

October 31- Halloween – This traditionally American holiday is quickly catching on with Costa Rican children as they dress in costume and trick or treat.