Costa Rica is home to many species of marine mammals.  The warm tropical waters provide a perfect nursery for humpback whales from both the northern and southern hemispheres.  Bottlenose and spotted dolphins frequently escort boats a few kilometers offshore.  Manatees can be found in the mangroves along the Caribbean coast. 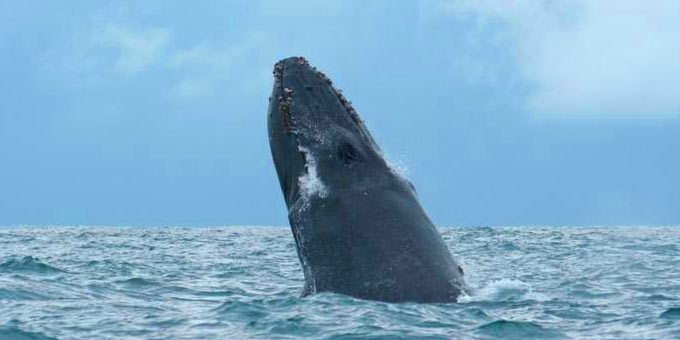 There are several species of whales that migrate to the warm waters of Costa Rica each year.   The most famous and abundant of which is the humpback whale.  Other species that visit include Pilot, Brydes, Orcas, Pseudo Orcas, Sei and Beaked whales.

Costa Rica has the distinction of having more months with humpback whales in residence than any other place in the world.

Humpback whales are the most commonly targeted for whale watching tours.  They can be found along both the Pacific and Caribbean coast, though much more reliably on the Pacific side.  They also come from both the northern and southern hemisphere.

The Pacific coast whales from the northern hemisphere generally come from the coasts of the northwestern United States to escape winter from December through April.  They can come solo or in pods of two to four.  When they arrive they often congregate into larger pods of up to a dozen.

Beginning in June, the Pacific coast humpbacks from the southern hemisphere come from the Antarctic.  They come up along the coast of South America passing by Chile and Ecuador.

Before coming to the tropics, these gentle giants feed on plankton and krill building up blubber for the long journey.  The adults do not eat when they arrive to Costa Rica.  Females that mated 12 months earlier give birth to one calf.  The calf will grow to at least 8 meters over the first year feeding on the mother’s milk.  Over this time, the mother can lose as much as a third of her own body weight.

When to go Whale Watching in Costa Rica

Humpback whale watching in Costa Rica is best from the end of August through mid-October.  This is when the southern whales are here are closer to shore.  They congregate to the south Pacific coast near Cano Island, Golfo Dulce and Marino Ballena National Park.  In recent years, there have been many sightings in Manuel Antonio as well.

Tours are available from Drake Bay, Sierpe and Uvita.  These tours are generally performed on boats of varying length from 25 – 35 feet or so.  Tours usually cost anywhere from $75 to $100 per person.

Bottlenose and spotted dolphins are commonly observed most of the year on the Pacific coast.  Bottlenose dolphins are also found on the Caribbean coast and are the only species of dolphin that you are likely to see on that side.

Spinner, Common, Risso’s and Roughtooth dolphins all visit the Pacific coast seasonally. The spinners can put on quite a show as they travel in pods of up to hundreds of dolphins that jump and spin at the same time.

When to go Dolphin Watching in Costa Rica

Bottlenose and spotted dolphins can be observed nearly year round.  They frequently follow boats offshore, so most catamaran cruises, snorkeling trips and fishing excursions are graced with the presence of the curious dolphins.

Here is a link to our dolphin and whale watching map including seasons.