Cano Island Biological Reserve is located off of the south Pacific coast of Costa Rica west of the Osa Peninsula.  The island and surrounding waters was designated as a protected reserve in 1978 to protect the indigenous burial grounds and artifacts found on the island as well as the coral reefs and underwater habitat around it.  Visitors go to Cano Island for world class diving and snorkeling.  They usually stay in nearby Drake Bay, taking a boat tour. 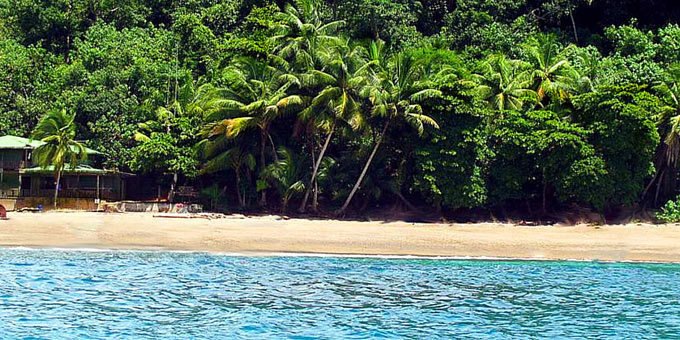 The Cano Island Reserve protects 2,900 hectares or 7,166 acres of territory.  The refuge ranges in elevation from sea level to 123 meters or 0 – 404 feet.  It protects rainforest, beach, and coral reef habitats.  There are hiking trails on the island, but there is seemingly constant controversy with the ranger station and therefore, visitors should not count on being able to go on land.  Visitors can however take boat tours to the marine area of the refuge.

There is not a lot of terrestrial wildlife in the reserve.  There are some small frogs, lizards, snakes, opossums, peccaries, and pacas, but these animals are few and far between.  In addition, there are less than 15 species of birds, with the exception of sea birds, which are abundant.

The main attraction is under the water.  There are 19 species of coral in the waters surrounding the island.  Within these reefs are hundreds of species of fish and mollusks.  A few of these species include white-tipped sharks, manta rays, sting rays, moray eels, barracudas, tuna, giant snapper and grouper, sailfish, marlin, needlefish, and many colorful reef fish.  In addition there are often olive ridley sea turtles and migrating humpback whales, false orcas, pilot whales, and several species of dolphins.

Cano Island Biological Reserve is managed by the Costa Rican government.  It is open every day from 8 AM – 4 PM.  There is a ranger station with restrooms, though it is often closed off to visitors.  The entrance fee is $15 per person.  There are no overnight facilities.  The majority of visitors stay in nearby Drake Bay lodges.

The weather on Cano Island is hot and moist.  Temperatures are usually in the 90s during the day and 70s at night.  The island receives 4,000 mm or 157 inches of precipitation annually.  The driest months to visit are December through April.

Fun Fact: Cano Island has a history of being struck by lightning more than any other place in Central America. This is thought by locals to be because Cano Island was a Pre-Columbian cemetery and the land is believed to be sacred.