There are five species of Costa Rica sea turtles which we will describe below, but first we’ll start off by describing what it is like to witness a nesting turtle.  Observing a nesting sea turtle is truly an amazing experience and one that few people will ever have the pleasure of witnessing.  Words simply cannot describe the inspiration of watching one of these giant reptiles appear out of the sea! 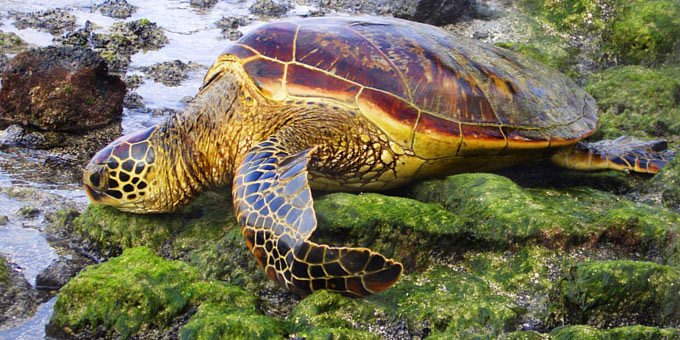 The cumbersome female crawls up the beach in search of the perfect nesting site above the high tide mark.  When she finds it, the real work begins as she uses her flippers to dig a hole approximately 18 inches deep where she will deposit her eggs.  Once she is ready to begin laying, she enters a trance like state and deposits golf ball size eggs.  After laying the eggs, she covers the nest and carefully smoothes over the sand so the site is not noticeable to predators.  She then makes her way back to the sea and disappears into the waves.

The whole process from landing on the beach, nesting and then to going back to sea takes around 45 minutes to an hour to complete.  It is an inspiring sight and one that you will not likely ever forget.

For the embryonic turtle, this is just the start of an experience where the odds are stacked against it.  Predators such as raccoons, dogs and humans dig up nests to feast on the eggs.  Humans pose the greatest threat in some areas.

After they hatch, it is a dangerous race to the sea as bird and other predators feast on the hatchlings.  Once they reach the sea, they have to first make it through the crashing waves and then contend with the awaiting predator fish.   For most species of turtles the odds of unassisted survival from egg to are around 1 in 100.

Species of Sea Turtles that Nest in Costa Rica

There are five species that utilize the beaches of Costa Rica for nesting.  Each is unique and plays vital roles in the environment.

The Olive Ridley turtles are the most common in Costa Rica. They are smaller than most other sea turtles at an average length of 60 – 70 cm and weigh around 90 pounds.  Adults are a greenish-gray color and hatchlings can appear dark gray or black.

Olive Ridley turtles often nest in high numbers when the moon cycle and weather is right.  This is referred to as an arribada.  When this occurs, hundreds and even thousands of turtles can come to the beach to nest over the course of a few nights.  The phenomenon occurs regularly on two beaches in Costa Rica, Playa Ostional and Playa Nancite.  While these are the only beaches used for arribadas, Olive Ridley turtles utilize many other Pacific coast beaches for nesting in smaller numbers.  When nesting, these turtles often deposit 60 – 100 eggs at a time!

Loggerhead sea turtles have a low reproductive and are considered an endangered species.  The average loggerhead weighs around 300 pounds and average around 90 cm in length.  The shells are generally reddish-brown in color and the skin is a yellowish-brown color.  These turtles are known to nest along the Caribbean side and particularly Tortuguero National Park.  The average nest will contain more than 100 eggs.

Green turtles are probably the most graceful of the world’s sea turtle species.  Despite the name, their shells are actually dark brown to black in color.  These large turtles grow to an average length of about 90 cm and weigh around 280 pounds.  Tortuguero is one of the most important nesting sites for the Caribbean region.  The average green turtle nest will contain approximately 100 eggs.

These beautifully colored sea turtles are considered critically endangered.   Fisherman have hunted these colorful turtles nearly to extinction as the shells as used for decorative tortoiseshell materials.  The name comes from their curving beak, which is similar to a hawk’s beak.  Hawksbill turtles grow to around 100 cm in length and average approximately 180 pounds.  The average nest contains around 120 eggs.