Tortuguero National Park is located on the northern Caribbean coast of Costa Rica. It was created in 1970 to protect endangered nesting sea turtles.  The closest town is also named Tortuguero, which is a small fishing village that is only accessible by boat or plane.  Due to its remote location, Tortuguero remains one of the wildest national parks in Costa Rica.  It is only navigable by boat.  The park protects endangered sea turtles, but also provides essential habitat to numerous other species of wildlife. 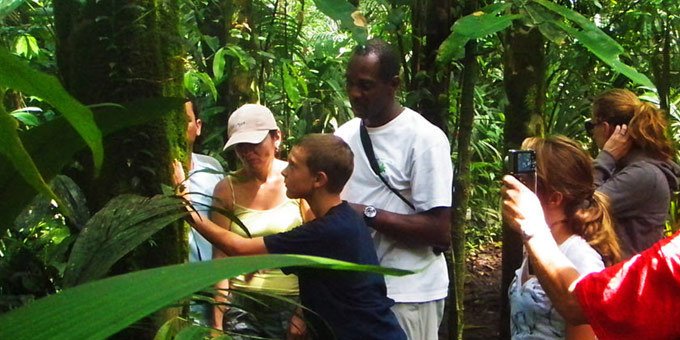 Tortuguero National Park protects an area of 19,000 hectares or 46,949 acres.  The elevation ranges from sea level to 311 meters. The highest point is Cerro Tortuguero, which looms over the rest of the park.  The park includes mangroves, rainforest, beach, and river habitats.

Wildlife is abundant in Tortuguero National Park.  Sixty species of mammals inhabit the park such as spider monkeys, capuchin monkeys and howler monkeys, jaguar, pumas, ocelots, sloths, river otters, and manatees.  Over 300 species of birds can be observed within the park including various species of parrots and parakeets, kingfisher, toucans, spoonbills, and more.  There are 111 species of reptiles within the park including green sea turtles, leatherback sea turtles, caiman, crocodiles, and boa constrictors.  Of the 57 amphibian species, red-eyed leaf frogs and strawberry poison dart frogs are the most popular with visitors.

Tortuguero National Park is managed by the Costa Rica government.  It is open daily from 8:00 am – 6:00 pm.  There is a ranger station with public bathrooms in the town.  The entrance fee is $15 per person.  There are no overnight facilities at the ranger station, but there are plenty of privately owned ecolodges within the park.

The best time to observe nesting turtles is from mid-July through mid-October.  This is when the more abundant green sea turtles nest on the beaches.  Nesting occurs at night and observation requires going with a licensed guide.  You will not be permitted to take photos due to park regulations.

Though the beaches of Tortuguero are beautiful and lined with palm trees for miles, swimming is very dangerous due to riptides and abundant sharks.

Tortuguero can only be accessed by boat or plane.  Most lodges in the park include a combination van and boat ride to and from San Jose.  You can also meet the lodges at the boat ramp and park your car in a fenced parking lot with security guards at La Pavona.  From San Jose you would take Rt. 32 east towards Limon. When you reach Guapiles, take Rt. 247 north to the La Pavona boat launch. Much of Rt.247 is unpaved, so you will need a 4x4.  In addition, this is not the safest route.  If you are meeting a lodge, it is advised to coordinate with them in advance to meet in Guapiles and follow to La Pavona.

The weather at Tortuguero National Park can be hot and steamy.  Daytime temperatures often hover around 90 degrees and overnight temps are usually in the mid-70s.  With an average of over 6,000 mm of rain annually, you should be prepared for rain.  The driest months to visit the park are February, March, August, September and October.

Fun Fact: Female green turtles nest once every two to four years and do so a couple times within a two week period. The turtle lays approximately 100 eggs in a hole which she digs with her flippers. Eggs require a 60 day incubation period before the baby turtles run the gauntlet to the sea. It is estimated that less than one percent make it to adulthood due to predation.