December is one of the most popular months to visit Costa Rica, and for good reasons! Most of the country will be experiencing great weather as the rain season transitions to the dry season at the end of November. By mid-month, tourism cranks up to full speed as travelers from all over the world arrive to spend their holidays in paradise. By the end of December, Costa Rica experiences its busiest tourism season of the year. Sun-worshippers pack the beaches, nature lovers fill the parks, and adventurers are having the time of their lives in the canopy, rivers, and waves! If you are considering travel to Costa Rica in December, feel free to reach out to us for insider information for vacation planning. 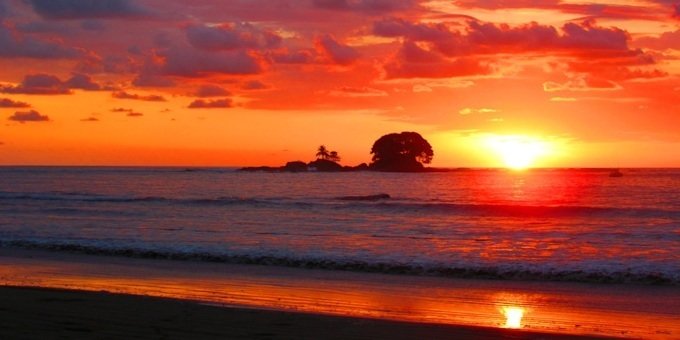 December truly is a terrific time to visit Costa Rica! Insiders will tell you that the beginning of December is one of the best times of the year to visit. It's also of the least visited times as many travelers either choose to come on Thanksgiving or over the Christmas holidays. The period in-between is a fantastic time to travel as the weather is beautiful and many hotels are still offering low season discounts. The landscape is still lush and green, yet the weather is getting drier by the day. While there will be other travelers, beaches will typically be much emptier than they are at the end of the month. As December continues towards the second half of the month, the airports will become packed, and eventually, the beaches are as well! And why wouldn't they? The weather is excellent, and everyone is celebrating the holidays. Well, at least everyone that prepared earlier in the year is celebrating! Most hotels are booked solid by July for Holiday Peak Season dates. Hopefully, you've read this in plenty of time! If not, you may want to consider booking for the following year, unless you are willing to make some concessions.

What to Expect by Region

December marks the beginning of the dry season for most of Costa Rica. The Pacific side and Central part of the country will see vast improvements in weather, and the Caribbean side will experience a fair amount of rain. The following outlines what you should expect regionally at this time of the year.

The Northwest Pacific and Guanacaste region are in the heart of their dry season by December. The end of the month will pack the beaches and hotels, and the weather is terrific! The streets of towns such as Tamarindo, Samara, Nosara, Coco, and Brasilito are lined with souvenir shops and restaurants to cater to the influx of tourists. December is an excellent time of the year for snorkeling, surfing, catamaran cruises, and scuba diving. It's also a good time for visits to Rincon de la Vieja National Park or even a riverboat trip at Palo Verde. These tours are always better in the sun, and there's no shortage of that in December in Guanacaste! The end of the year is also the best time to see giant leatherback turtles that nest at night at Playa Grande from November through February. Visitors should expect day time temperatures in the upper 80s to low 90s. Rains are much less frequent and usually only a passing shower in the late afternoon or early evening, if at all.

December marks the beginning of the dry season on the Central Pacific coast. Manuel Antonio and Jaco will see a stark contrast in weather from just a month earlier. By the beginning of December, rain is infrequent and usually limited to occasional passing showers but expect more sunshine than rain. The jungles are still lush and green from the rain season, so it's an ideal time to visit for the best of both worlds. Hikes in the national parks can be quite enjoyable with beautiful scenery and great weather. At the beginning of the month, you can expect a few people, but by the end of the month, parks will be at full capacity. Manuel Antonio National Park limits the number of visitors, so be sure to book it early or at least plan to arrive 20-30 minutes before it opens to ensure you can get in! Visitors can expect daytime temperatures along the coast to be in the mid-80s to lower 90s, with the warmest weather at the end of the month.

December is one of the best times to visit South Pacific areas such as Costa Ballena and the Osa Peninsula. You practically need scuba gear to go on a hike in these areas in September and October! The rains start to taper off in November, and by December, it's getting pretty dry but still lush and beautiful. The end of the year is a great time to visit Corcovado National Park or to go scuba diving or snorkeling at Cano Island. Visitors can expect hot temperatures, usually reaching the lower to mid-90s during the day. The South Pacific is a rainforest region, so we still recommend bringing an umbrella, but you'll likely use it more for the sun than the rain!

The Caribbean side of Costa Rica will be in the middle of the rain season in December. That doesn't mean that it will rain all day every day, but it will rain for at least a little while on most days with a few all-day events occurring occasionally. December is a great time for surfing on Playa Cocles in Puerto Viejo, but not such a great time for activities like snorkeling or scuba diving. It will still be warm, with daytime temperatures usually reaching the mid-80s.

Arenal Volcano, while located in the middle of the country, is located on Costa Rica's Caribbean slope. In other words, on the eastern flank of the Talamanca Mountains. This area is more affected by Caribbean weather patterns than Pacific but can be affected by both at times. With that said, Arenal is typically somewhat rainy in December. It is a rainforest area, after all, so this shouldn't come as a surprise! The rains can complement the hot springs, which can be a little too hot in the dry season, especially during the day. Most adventure and nature tours still carry on, whether it is raining or not. Bring an umbrella and a rain jacket and have a blast! It will be a little cooler than average in December, so expect daytime temperatures to reach the low to mid-70s.

While located only 15 km as the crow flies from Arenal Volcano, Monteverde Cloud Forest is more affected by the Pacific weather patterns. In December, visitors should expect a little less rain than usual, but this is a cloud forest region, and it can rain any day of the year. Visitors should prepare with rain gear and warm, quick-dry clothing. December is a transition month, and temperatures can fluctuate fairly significantly, particularly at the beginning of the month. By the end of the month, daytime temperatures will usually reach the low 70s with lower temps in the higher elevations of the cloud forest.

Most tour and transportation costs will remain the same throughout December, but the hotel and rental car rates vary significantly. The beginning of December can be one of the more affordable times to visit Costa Rica as many hotels offer low season rates until around December 15 - 20. But at that time an through the end of the month, expect the highest prices of the year. The holiday peak season is by far the costliest and most popular time to visit Costa Rica. When comparing an average hotel's rates from low season to peak season, rate increases can range from 50% - 300% increases!

When Should I Book for December Travel Dates?

As you can imagine, this varies significantly, but there is a common theme, book early. Costa Rican hotels rely on early reservations and compete for the first 50% of their desired occupancy in the golden 3-8 month in advance range for low and regular reason dates. Once they reach that desired occupancy, they relax and increase prices. It's much different for the holiday peak season. You can't possibly book early enough! Many of the smaller, high-end boutique hotels are simply impossible to book as they are often booked a year and a half to two years in advance by groups of family, friends, or even corporate incentive groups. The top-tier of small luxury hotels that do not permit group bookings sell out as early as April, with the majority of the better midrange hotels fully booked by July. The larger chain resorts, such as the Margaritaville, Westin, Secrets, and Dreams, will have availability through October, but the prices just keep increasing along with their occupancy. The best rates are early in the year and expect them to continue to increase throughout the year.

How we can help you for December dates

We have an inventory of rooms allotted to our company all year from various hotels. Therefore, often when a hotel has sold out, we still have rooms available until later in the year, though the better hotels always sell out early. We also work closely with hotels to find holes in their occupancy and even receive notifications for cancellations, and then build trips around that. Additionally, we have contract rates for many hotels that will not increase as their occupancy does, contrary to mega online travel agencies. We can often build itineraries when it's difficult to impossible for you to do on your own, especially if you'd like to stay at luxury or mid-range hotels. Contact us now to start planning your December vacation!

The bottom line; book as early as possible for December for both availability and the best rates.

Due to the coronavirus situation, as of mid-April, pricing and availability have significantly changed for December 2020. Many of the small boutique hotels that were booked solid for the end of the year by a single group of travelers received cancellations. The cancellations opened them up to free sale, which generally is not possible by this time of the year. The opening of availability has caused an unusual situation. Many travelers previously scheduled to travel in March, April, and May are now rescheduling for the holiday peak season. This change in travel flow created a situation we hadn't seen before as we went from limited availability to abundant availability, and now a mad dash by travelers to book these great hotels and the best rooms all at once. All we can add is our observations and the old saying "book it while the bookin's good"!

December 31 - New Year's Eve - Festivities will occur across the country.