Costa Rica is a primary nesting site for four species of Sea Turtles; Leatherback, Green, Hawksbill and Olive Ridley Sea Turtles. These turtles utilize beaches on both the Caribbean and Pacific side and have done so for thousands of years. Turtles nearly always nest late at night and hatchlings come out at this time as well after an average 45 day incubation period. The following is but a small list of beaches that the turtles frequent most often. 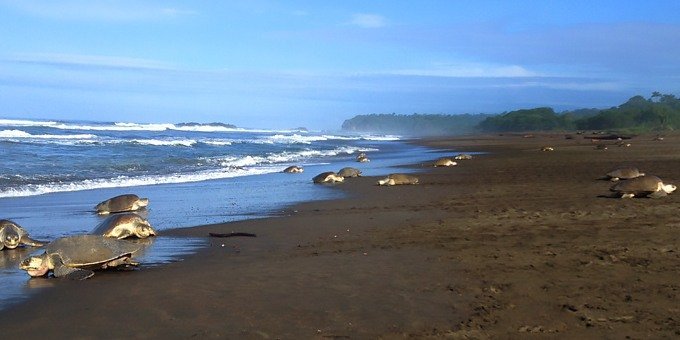 Playa Nancite: Located within Santa Rosa National Park in Guanacaste, Playa Nancite is a primary nesting site for Olive Ridley Turtles. The beach is remote and requires some serious 4x4, hiking and permission from the ranger station to access. Turtles nest from July through November and can come in thousands strong during arribadas.

Las Baulas National Park: Located at Playa Grande, Guanacaste, this is one of the easiest turtle nesting beach to access. The beach is a primary site for giant Leatherback Turtles to nest, which are the largest reptile in the world. Turtles nest from mid-October through mid-February.

Camaronal Wildlife Refuge: The refuge is located just south of Samara and is probably the most consistent place to observe turtles nearly year round. Three species come to nest here at various time of the year including Hawksbill, Leatherback and most commonly, Olive Ridley Sea Turtles. Most turtles come between May through November, but stragglers can be observed nearly every night from February through December.

Osa Peninsula and Corcovado: Playas Llorana, Corcovado, Sirena, Madrigal, Carate and Matapalo are all nesting sites for Olive Ridley, Hawksbill and East Pacific Green Sea Turtles. Most of these sites are found within Corcovado National Park and require overnight passes to visit.

Tortuguero National Park: The Park is probably the most known turtle nesting site in Costa Rica. Atlantic Green Sea Turtles utilize the beaches here for nesting from mid-July through mid-October.

Gandoca Manzanillo Wildlife Refuge: Located on the southern Caribbean coast, several species of turtles nest here; Atlantic Green, Hawksbill, Leatherback and Loggerhead. Leatherback Turtles are the most notable of these species and nest here annually from March through May.