Corcovado National Park is located in Southern Costa Rica on the Osa Peninsula.  The park was created in 1975 to protect the area from a modern day gold rush and logging.  The closest towns are Drake Bay, Puerto Jimenez and Carate.  All three are remote, but Drake Bay is the most common access point. 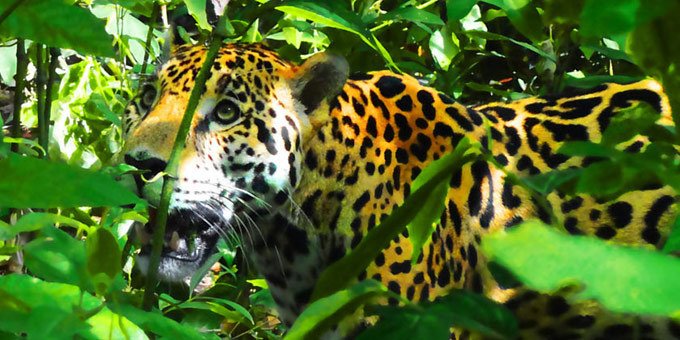 Corcovado protects 4,178 hectares (10,324 acres).  The park ranges in elevation from sea level to 745 meters (0 – 2,444 feet).  It protects several key habitats including mangroves, rainforest, river, beach, and even coral reef.  There are several major hiking trails in the park including: Drake to San Pedrillo, San Pedrillo to La Sirena, Los Patos to La Sirena, Carate to La Leona, and La Leona to La Sirena.  There are also shorter trails at the San Pedrillo Station and La Sirena Station, which make for a great day trip.

Corcovado National Park is home to numerous flora and fauna.  Mammals that inhabit the park include a four species of monkeys found in Costa Rica; capuchin, howler, squirrel, and spider monkeys.  There are two-toed and three-toed sloths, jaguars, pumas, ocelots, jaguarondis, tapirs, anteaters, deer, pacas, peccaries, coaties and much more.  There are many reptiles and amphibians including all four species of sea turtles that nest on the Pacific coast of Costa Rica; leatherback, olive ridley, loggerhead and pacific green turtles.  Of course, there are also caiman, crocodiles, iguanas, numerous species of lizards and snakes.  In addition, there are several species of dart, glass and tree frogs and salamanders.  Corcovado is also home for many species of birds including trogons, hummingbirds, a large population of scarlett macaws, red-lored parrots, parakeets, and king vulture to name a few.  Closer to the coastline estuaries, egrets, herons and kingfishers are all common.

Corcovado is a government managed national park.  The park is open from 7:30 AM – 5:00 PM daily.  There are ranger stations at La Leona, Los Patos, San Pedrillo and La Sirena, each offers public restrooms.   The entrance fee to Corcovado is $15 per person and a permit is required.  Permits are not guaranteed as the park limits the number of visitors.  The easiest way to obtain a permit is through a tour operator, though you can obtain permits directly with a little time and patience.  Camping with a permit is possible at the San Pedrillo and La Leona Station, though they do not provide food and limit what you can bring in.  There are basic, dorm style overnight facilities at the La Sirena Station.  Any overnight trips will require a permit, which cannot be reserved more than a month in advance. Most visitors to Corcovado stay in Drake Bay lodges or in Puerto Jimenez hotels and then take day trip to the park.

In addition to the terrestrial wildlife, the waters surrounding Corovado and the Osa Peninsula are home to many species of fish and marine mammals. Humpback whales from both the northern and southern hemispheres come to this area to breed annually.  There are also false orcas and pilot whales from December through April.  In addition, roughtoot, common, spinner, spotted and bottle nosed dolphins are all common spotted just off shore. Check here for dolphin and whales seasonal patterns in Costa Rica.

The easiest way to get to Corcovado is by plane from San Jose.  Alternatively, from San Jose, take Rt. 27 west until you reach the Rt. 34 exit.  Take Rt. 34 south to Palmar Sur.  In Palmar Sur, turn right on the first road after the bridge from Palmar Norte and follow the paved road to Sierpe.  Once in Sierpe, go to the Las Vegas Restaurant and they can assist you with secure parking and a boat to Drake Bay.

Generally, Corcovado is hot and steamy with humid conditions.  Temperatures average 70 – 90 degrees Fahrenheit.  With an average annual rainfall of 5,000 mm (197 inches), visitors should be prepared for rain.  The driest months to visit Corcovado are December through April.

Fun Fact: Corcovado National Park was created in the 1970's due to widespread destruction of vital habitat, caused by illegal gold mining and logging operations.  It is now one of the most biologically intense places on the planet.