Gandoca Manzanillo Wildlife Refuge is home to some of the most beautiful scenery in all of Costa Rica! It is located along the southern Caribbean coast creating beautiful jungle lined beaches. The refuge protects 5,303 hectares of ocean front, jungle and mangroves that provide important habitat for many species of endangered wildlife and flora. 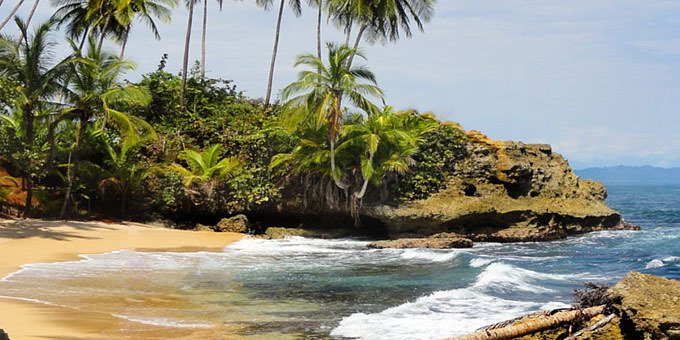 The wildlife and flora of Gandoca Manzanillo Wildlife Refuge is simply spectacular as these are some of the most virgin forests in Central America. Mammals within the refuge include jaguar, puma, tapir, coatimundi, sloths, monkeys, anteaters and many more. Birdwatching is phenomenal here with over 360 species identified including the keel-billed toucan, trogon, kingfisher and highly endangered harpy eagle.

The mangroves of Gandoca Manzanillo Wildlife Refuge are considered to be the only stable system in the Caribbean. These mangroves provide vital habitat to crocodiles, manatees, migratory birds and a great number of fish.

Gandoca Manzanillo not only protects land area, but also the reefs in front of the beaches. These are some of the best diving reefs in Costa Rica. The coral reef right just off the shore is home to beautiful marine life such as angel fish, urchins, oysters, shrimp, lobsters, sponges and much more.

The beaches of the refuge are equally important to the jungle, mangroves and reefs as they play a vital role in the existence of several species of sea turtles. The most famous of which, the leatherback turtles come to these shores from March to July to nest their eggs. The heaviest activity occurs in April and May, with hatchlings starting to emerge at the end of May though the end of the season.

There is a park station with facilities at Gandoca Manzanillo Wildlife Refuge. It is highly recommended to visit with a guide for safety and all around experience as the wildlife is camouflaged.

The Southern Caribbean is a region of vast contrasts in weather. Temperatures remain the same nearly year round with average day time highs in the low 90s and night time lows in the upper 70s. Precipitation varies by month with the months of February, March, September and October being the driest.

Fun Fact: Many regard the beaches at Gandoca Manzanillo Wildlife Refuge to be the most beautiful in Costa Rica.