Exploring the canopy of the rainforest was initially done in the form of a hand pulled zipline.  This eventually turned into an adventure activity.  As the zipline evolved, it became obvious that there still was a need to explore the canopy in a less adventurous way.  The majority of wildlife in the rainforest lives in the canopy, so what better way to explore this than via small bridges?  The hanging bridges started off as exactly that – hanging bridges.  These were tied together with ropes and planks to step on.  It didn’t take long for the concept of these bridges to evolve into a safer and more stable method of construction.  These days, most Costa Rica canopy bridges are fabricated with steel and surprisingly stable. 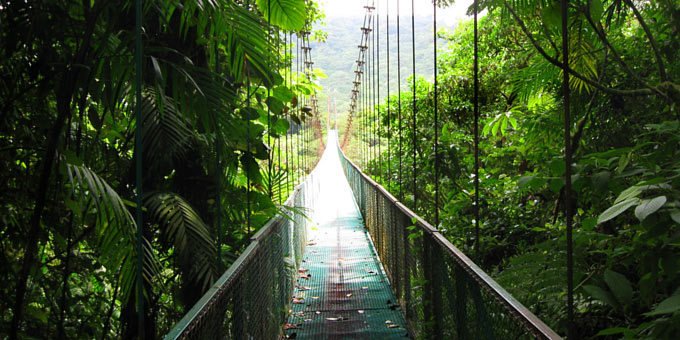 While most hanging bridges tours are available with or without a guide, we highly recommend going with a guide.  These guys grew up here and know how, when and where to spot the wildlife.  A good guide will almost always hear the animal first and then search for it until he spots it.  There is simply no way a visitor could do this.

Aventuras Monteverde: Aventuras Monteverde offers an affordable hanging bridges tour through the cloud forest.  The bridges are at various lengths and heights.  They also offer zipline, ATV and horseback riding tours on the site as well.

Sky Adventures Monteverde:  Sky Adventures in Monteverde also features a hanging bridges tour.  The tour is approximately 3 hours long and includes 5 bridges of varying length with the longest at 984 feet.

Arenal Hanging Bridges: This is our favorite canopy hanging bridges tour in the Arenal area.  The tour features several kilometers of light hiking and crosses steel bridges of varying lengths and heights.