Carara National Park is located in the Central Pacific region of Costa Rica.  The park was created in 1979 to conserve valuable rainforest habitat for endangered scarlet macaws and other wildlife.  The closest town to Carara is Tarcoles, though, most visitors stay in nearby Jaco or Herradura. 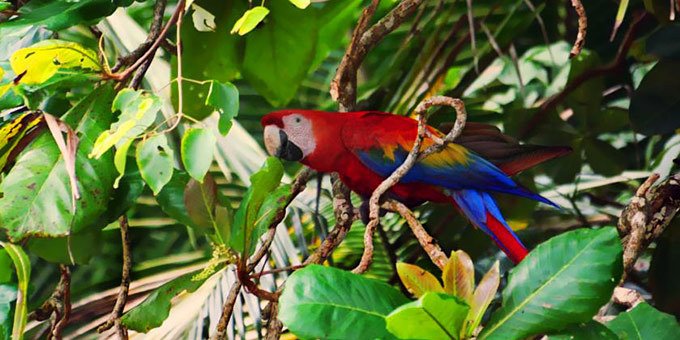 Carara protects 4,700 hectares (11,614 acres).  The elevation ranges from 100 – 500 meters (328 – 1,640 feet).  Habitats within the park include rainforest and river habitats.  There are hiking trails within the park as well as boat tours on the famous Tarcoles River, which is home to giant crocodiles.

The park protects an abundance of wildlife.  There are many species of mammals including armadillos, pacas, kinkajous, peccaries, two and three toed sloths, capuchin, spider and howler monkeys, anteaters and more.  There are plenty of reptiles and amphibians including massive crocodiles, iguanas, several species of dart frogs, and many species of snakes.  Most people visit Carara for the birdwatching though.  The main attraction is the scarlet macaws that breed there.  Many other species of birds frequent the park including blue-crowned mot-mots, collared aracaris, guans, trogons and hummingbirds in the higher elevations.  Species such as herons, egrets, and kingfishers can be found along the river banks.

Carara Park is managed by the Costa Rican government.  It is open daily from 8 AM – 4 PM.  The park has a ranger station with public restrooms.  The price of admission is $10 per person.  There are no overnight facilities at the park, but there are several lodges nearby and many options for hotels in Jaco and Herradura.

The park is forest covered with steep slopes and massive trees draped with vines and epiphytes. This creates the perfect habitat for birds and therefore draws birdwatchers from all over the world.

The best time to observe the resident scarlett macaws is in the early morning and late afternoon, when they are more active.  Crocodiles can be observed at any time of the day, so planning your day trip with these factors in mind will result in a much more rewarding experience.

From San Jose, take Rt. 27 west until you reach the Rt. 34 exit.  Take Rt. 34 south until you pass the Tarcoles Bridge (giant crocs can be observed from the bridge, though do not leave valuables unattended in your car).  After passing the bridge, the entrance to the park will be on the left.

Carara Park is located in a transitional area between the more damp and humid southern zone of Costa Rica and drier northwest Pacific.  Temperatures typically range from the 70s – 90s Fahrenheit.  The park receives an average of 2,800 mm of rain per year (110 inches).  The driest months to visit Carara are December through April and June through August.

Fun Fact: Carara National Park is home to the largest population of Scarlet Macaws in Costa Rica. These beautiful parrots are well known for their distinguished features and unmistakable call.