Poas Volcano National Park is located in the Alajuela Province and was established in 1971. The park protects 16,000 acres and contains one of the active volcanoes in Costa Rica. This area is fun to explore as the main crater is 950 deep and there are two other smaller craters. The main crater has the most activity and a beautiful green-blue lagoon in the middle which is created from rainwater mixed with volcanic minerals. The hiking trails are well defined, going around the craters and also through some of the flora and fauna that is native to this area. 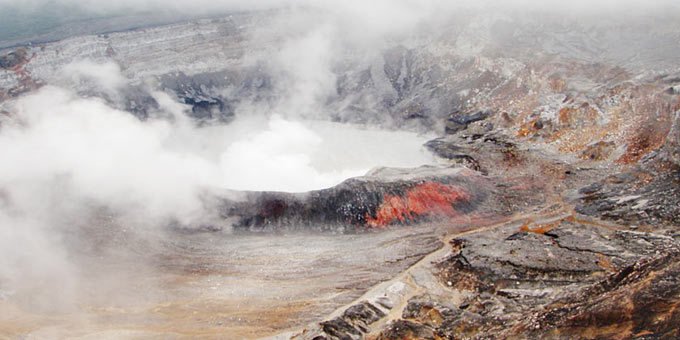 The main crater is not known for having frequent lava flows, with the last major eruption during the 1950s when it erupted several times over a two year period. Poas Volcano has a misty feel to it as the clouds nearly always hover over. This is created from the steam that is released from the volcano due to lake water seeping into the cracks. The two other craters are known as Botos and Von Frantzuis. Botos has not experienced an eruption in the last 7,000 years, but has a beautiful bright green colored lake in the middle. Von Frantzuis is an extinct crater that provides for beautiful scenery.

Unlike many other Costa Rica parks, Poas Volcano National Park does not have a large variety of plants and wildlife but there are definitely some present. Many birds reside in this area such as hummingbirds, toucans, and even the occasional trogon. There are several different trails to choose from and each shows a completely different side of the park. For example the Excalonia cloud forest trail is well known for birdwatching in the cloud forest area.

Poas Volcano National Park is opened from 8:00 am to 3:30 pm and has a 10USD entrance fee per person. It is advised to dress warmly, as temperatures are on the cooler side once higher in elevation.

Located in a mixture of rainforest and cloud forest, the weather in Poas Volcano National Park is fairly predictable. Expect warm early afternoons and cool and damp conditions in the morning and late afternoons. Daytime temperatures average in the mid 70s with night time lows averaging in the upper 50s. The most consistent rain is experienced between the months of May through November with the heaviest rains September through November.

Visitors should pack shorts, tee shirts, appropriate shoes, rain gear, sun block. It is also advised to bring at least one pair of pants, a long sleeve shirt, and even a sweat shirt or light jacket.

Fun Fact: Poas Volcano has the second largest volcanic crater in the world.