The quiet fishing village of El Jobo is well-known to locals for its gorgeous beaches.  It is located on a small peninsula in the northwest corner of Guanacaste, near the Nicaragua border making it one of the most secluded beach destinations in Costa Rica.  The El Jobo Peninsula is surrounded on three sides by the picturesque Pacific Ocean which is lined with scenic rock outcroppings separated by beautiful tropical beaches. To the north, there is the wind-blown Bahia Salinas.  The protected Bahia Jobo is to the west and the Golfo de Santa Elena is to the south. 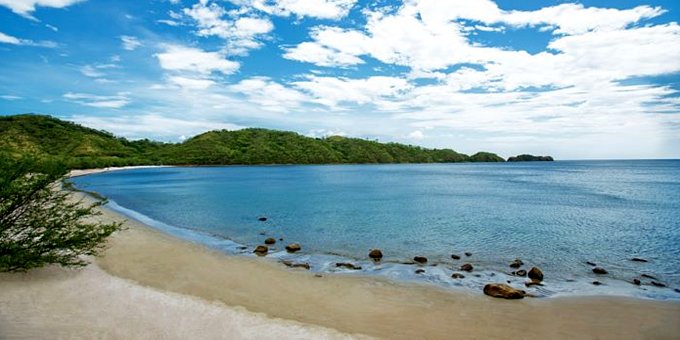 For many years, El Jobo had remained relatively undiscovered by tourism.  Ecoplaya Beach Resort, located on Playa La Coyotera or La Coyotera Beach was the only resort option in the region.  Visitors could come and walk the beaches for hours without seeing another soul.  The main attraction was the wind surfing and kitesurfing on Bahia Salinas or Salinas Bay which is good nearly year round, but outstanding from November through March.

This all changed with the opening of the 447 room Dreams Las Mareas Resort.  The resort was recently constructed on the secluded Playa El Jobo or El Jobo Beach.  This is one of the most beautiful beaches in northwest Guanacaste with light cocoa colored sand that is surrounded by green forest covered hillsides and of course, the new resort.  The protective hillsides block most of the wind, making this one of the most desirable beaches in the area.

While the majority of all inclusive beach resorts in Costa Rica dominate their surroundings, the Dreams Resort embraces it, making it a truly magical resort to visit.  The difference is the developers of this property built it in harmony with its surroundings.  Their efforts are evident in every detail and have paid off extraordinarily.

There are few roads accessing the remote southern Jobo Peninsula and Golfo de Santa Elena or Gulf of Santa Elena. There is however a road from the center of El Jobo to Playa Manzanillo, which is a secluded beach that is well worth the day trip.

There are several national parks, reserves and even volcanoes in the El Jobo area.  Most of which are included in the World Heritage Site, Area de Conservacion Guanacaste.  Within this site are the Junquillal Refuge, Guanacaste National Park and Santa Rosa National Park.  The Junquillal Refuge, located just to the south, is a small refuge that protects mangroves and coastal area.  Guanacaste National Park is an expansive park located to the west, protecting tropical dry forest and the Orosi Volcano.  Santa Rosa National Park is located to the south.  This is one of the most important national parks in Costa Rica, protecting tropical dry forest, mangroves, and marine habitat.  This park is also a primary nesting site for Olive Ridley Sea Turtles, which can nest thousands at a time during arribadas on Playa Nancite.  A couple hours to the southeast, Rincon de la Vieja National Park protects an active volcanic range and tropical dry forest.

The entire El Jobo area is an up and coming destination.  Despite the big new resort, it still maintains a rural small town feel.  At present, there are only a handful of professionally run tour options such as kitesurfing, wind surfing, canopy zipline, horseback riding, visits to nearby parks and reserves, and snorkeling.  This will undoubtedly change in the coming years as the area grows in popularity and mainstream tourism providers bring professional services to the area.

The weather in the El Jobo area is hot and dry most of the year.  This is considered a tropical dry forest area.  Day time temperatures are typically in the mid-80s to low 90s.  Night time temps are usually in the low to mid-70s.  While the rain season is considered May through November, the area really only receives steady harder rains in September and October.  Even during these months, rains usually last for an hour or two in the late afternoon. That said, Costa Rica in general is a rainforest area and weather can be unpredictable, especially during the rainy season.

Visitors to the El Jobo area should pack swimwear, casual resort clothing, safari or adventure clothing if applicable, sun block, bug spray, camera, binoculars, and a sense of adventure.  Bring rain gear if traveling between May and November.