Rincon de la Vieja National Park is located in the Northwest Pacific region of Costa Rica, in Guanacaste.  The park was created in 1973 to protect and manage the volcano and rare tropical dry forest surrounding it.  The closest large town is Liberia, though there are several adventure ranches scattered around the Rincon de la Vieja area. 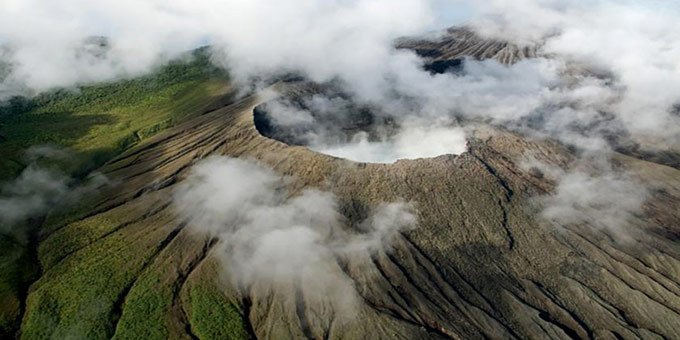 Rincon de la Vieja National Park protects 14,083 hectares or 34,800 acres of land.  The elevations range from 396 - 1,916 meters or 1,299 - 6,286 feet from the base to the top of the volcano.  The park protects river, rainforest and rare tropical dry forest habitats.  The Caribbean slope of the park is covered with lush rainforest.  The Pacific slope is covered with tropical dry forest.  There are several hiking trails, though it is no longer permitted to hike to the summit.

Rincon de la Vieja Park is home to plenty of wildlife.  Among mammals, there are three species of monkeys, including white-faced, spider and howler monkeys.  There are several species of wild cats including pumas, jaguars, and ocelots.  In addition there are armadillos, coyote, tapirs, and kinkajous.  There are many species of reptiles including iguanas, whip tailed lizards, rattlesnakes, boa constrictors, fer-de-lance and much more.  Over 300 species of birds have been identified in the park including curassows, laughing falcons, crested guans, spectacled owls, blue-crowned mot-mots, oropendolas, white fronted parrots and many other species.

Rincon de la Vieja National Park is government managed.  The park is open Tuesday through Sunday from 8 AM – 3 PM (closed on Mondays).  There are two main ranger stations, the Las Pailas station and the Santa Maria station.  Each offer restrooms and potable water.  The entrance fee at either station is $15 per person.  Camping is permitted with a permit at the Las Pailas station.  Most visitors to the region stay at lodges in the area of the park.

The Las Pailas sector of the park is located on the Pacific slope.  It is quite interesting with plenty of evidence of volcanic activity.  In addition to rare tropical dry forest, there are natural hot springs, boiling mud pits, and fumaroles.  This area is very hot and dry most of the year.

From San Jose, take Rt. 27 west all the way past Puntarenas until you reach Rt. 1.  Take Rt. 1 northwest to Liberia.  After Liberia, continue approximately 5 minutes until you reach the community of Cereceda.  Turn right, following signs to Curubande.   Pass by Curubande and continue until you reach Hacienda Guachipelin, where you will have to pay a small toll ($1.50 as of this writing) and then continue on to the Las Pailas Ranger Station.

The Santa Maria Sector is located on the Caribbean slope of the park.  This area receives much more precipitation and the result is lush forest with different characteristics than the dry forest on the other side of the park.  There is a small display about traditional cattle ranching (not always open) and good hiking trails.

From San Jose, take Rt. 27 west all the way past Puntarenas until you reach Rt. 1.  Take Rt. 1 northwest to Liberia.  When you reach Liberia, you will see a sign for the Santa Maria Sector on Avenida 6.  Turn right, following the signs approximately 25 kilometers until you reach the ranger station.

The majority of visitors to Rincon de la Vieja visit the Las Pailas section of the park, where it is very hot and dry.  Temperatures usually exceed 90 degrees during the day and mid-70s at night.  This area receives 2,000 mm (79 inches) of rain annually.  Those visiting the Santa Maria side, which is on the Caribbean slope, should expect temperatures to be 5 – 10 degrees lower and a little more rain.  The driest time on the side is December through August.

Fun Fact: In September 2011, Rincon de la Vieja experienced a couple mini eruptions sending large plumes of smoke in the air.  Hiking to the summit has not been permitted since.  The last major eruption was around 3,500 years ago.