With over 850 species of birds positively identified, bird observation in Costa Rica is exceptional.  Think about this number.  Costa Rica is roughly the size of West Virginia, yet has more bird species than Canada and the United States combined.  This is the highest concentration of birds within any area of the Americas. 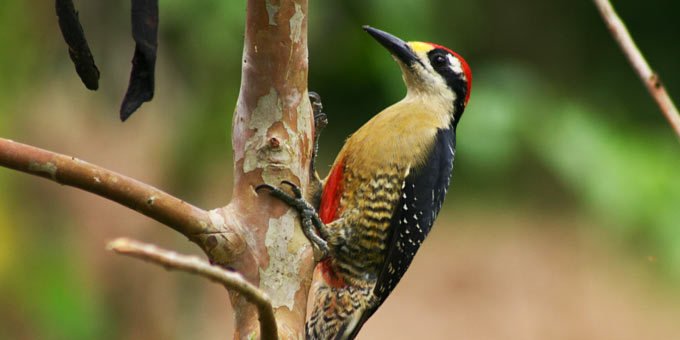 The reason Costa Rica is home to so many species of birds is largely due to the geography.  The country is located on an isthmus which connects North and South America.  It provides diversity in tropical rainforests and cloud forests that can be as high as 3,500 meters.  There are coastal mangroves and many small pocket eco-systems throughout the country.

Of the birds in Costa Rica, eight species are endemic and 19 are considered threatened globally.  Around 600 species are considered resident and the rest migrate from North and South America.  These include highland and lowland species as well as waterfowl.

While birdwatching in Costa Rica in general is excellent, there are certain areas that are better than others, especially if you are targeting certain species. The entire Talamanca Mountain range which divides the country provides great birdwatching opportunities.  Areas such as Monteverde Cloud Forest and Los Quetzales National Park are perfect for spotting species such as the quetzal, trogons, hummingbirds, emerald toucanettes, tanagers and even bell birds.

Monteverde is located in the northern most part of Puntarenas.  It is roughly 1,500 meters above sea level.  This is a popular tourist destination that ties in well with other destinations such as Arenal Volcano and beaches on the central and northwest Pacific coast.

San Gerardo de Dota is the most popular town in the area of Los Quetzales National Park.  This is an off the beaten track destination, but home to some great eco-lodges.  Most of the lodges offer birdwatching tours in the park.  This area ties in well with destinations along the south Pacific coast including the Osa Peninsula.  It also works well with itineraries that include the Turrialba Volcano area and even the Caribbean coast (though this is a little out of the way).

There are many species of birds within Braulio Carrillo National Park and the Poas Volcano area.  Braulio Carrillo is a mountainous area with a few hiking trails.  Arranging for a birdwatching guide can be difficult simply due to the location (though we can arrange for a private service upon request).  Poas Volcano and the surrounding area is mostly cloud forest.  There are many hummingbirds, trogons, finch, tanagers, toucanettes and flycatchers.

La Amistad National Park is home to numerous species of highland birds.  The only problem is this is one of the least accessible parks in the country with few public trails.

Much of the country can actually fit within this category, so we will stick with some of the more popular areas.

The area of Miravalles Volcano and Tenorio National Park is an excellent location for birdwatching.  This is a transitional area between the dry forests of northwest Guanacaste and the rainforests of the Caribbean slope.  It is also on the fly zone for migratory waterfowl working their way down from Lake Nicaragua to Palo Verde and destinations to the south.  There have been more than 450 species identified within the area. The Sarapiqui region is another fantastic destination for birdwatching in Costa Rica.  The most popular and sought bird is the great green macaw.  These birds migrate to the Sarapiqui region annually to breed.  The Costa Rican government recently created Maquenque National Wildlife Refuge to protect and enlarge their breeding area.

The Sarapiqui region is also home to hundreds of other species of birds.  Common sightings include keel-billed toucans, several species of trogons, hummingbirds, woodcreepers , kingfishers and many more.

Carara National Park is located near Jaco Beach, but a world away when considering the wildlife and birdwatching.  The park is best known for its healthy population of scarlett macaws, though there are many other species that call this park home.  In fact over 400 species have been identified in the park which consists of several habitats and life zones from lowland to highland rainforest.

Manuel Antonio is a combination of a national park and beach destination on the Central Pacific coast.  The park is mostly known for the mammals it protects such as 3 species of monkeys and 2 species of sloths, but this is also a great place for birdwatching.  The area is home to many toucans, aracaris, parakeets, vulchers, egrets, herons and much more.  In fact, over 350 species of birds have been identified in the area.

Hacienda Baru Wildlife Refuge is located a little south of Manuel Antonio.  A stop by this lodge and reserve is a must for any serious birdwatcher.  Similar to Manuel Antonio, over 350 species of birds have been identified on this 330 hectare reserve.  Trails are available for self-guided tours or you can add a guide for a small fee.  There is also a tower that was built for birdwatching in the canopy.

Corcovado National Park is one of the most biologically diverse locations on the planet.  It is home to over 365 species of birds including the scarlett macaw, tanagers, orioles, oropendolas, honeycreepers, warblers, wrens, manakins, flycatchers, kingfishers, parakeets, parrots, falcon, woodpeckers, toucans, trogon, toucan, aracari, puffbird, jacamar, hummingbirds, motmot, cuckoo, owls and many more.

Across the Golfo Dulce, Piedras Blancas National Park is also a superb location for birdwatching in Costa Rica.  The birding list is similar to Corcovado and the Osa Peninsula, though this park is less visited.

The Caribbean side of Costa Rica offers excellent birdwatching opportunities.  Cahuita National Park and Jairo Mora Sandoval Gandoca Manzanillo Wildlife Refuge top the list for the best birdwatching places, though a walk through the grounds of most lodges will yield a wide range of species.  Keel-billed and chestnut-mandibled toucans and aracaris can be spotted easily.  Macaws are also making a comeback in the southern area with the help of the ARA foundation.  Parakeets, parrots, trogons, flycatchers, cuckoos, oropendolas and tanagers are also common among many other species. There are several excellent locations for mangrove birdwatching.  These are located along both the Pacific and Caribbean coasts.

The Sierpe Mangroves on the south Pacific coast provide habitat for many waterfowl including tiger heron, kingfishers, ibis, whistling ducks, egrets, jabiru and more.  There is also a healthy population of scarlett macaws, parakeets, parrots, flycatchers, trogons and many other birds.

**There are plenty of other areas that provide excellent opportunities for birdwatching in Costa Rica.  For the sake of keeping this a one page article we have only included the most known and visited destinations.