Palo Verde National Park is located at the headwaters of the Gulf Nicoya in the Guanacaste Province of Northwest Costa Rica.  The park was created in 1978 to reclaim land mangroves, flood plain and river habitat between the Rio Tempisque and Rio Bebedero.  Most visitors come to Palo Verde for riverboat safaris as this area is home to many species of wildlife.  The closest town is Canas, though most visitors come from the beach towns of Guanacaste. 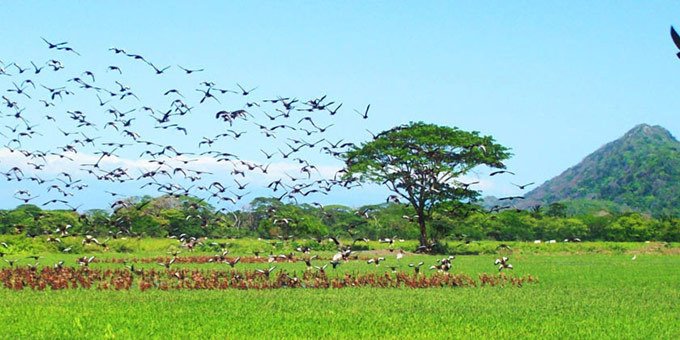 Palo Verde is a large park, containing 18,410 hectares or 45,492 acres of territory.  The elevation of the park ranges from sea level to 268 meters or 0 – 879 feet.  It protects tropical dry forest, mangrove, and river habitats.  There are several trails that lead from the station to observation points overlooking the marshland, however, the best way to get around the park is by boat.

There are many species of wildlife in Palo Verde Park.  Mammals that live here include collared peccaries, deer, coyotes, howler monkeys, capuchin monkeys, pacas, agoutis, tayras, and pumas.  The park is home to many reptiles and amphibians including giant crocodiles, iguanas, whip tail lizards, rattlesnakes, coral snakes and boa constrictors.  Palo Verde is also home to many species of birds, with over 300 species known to inhabit it.  It is recognized as one of the most important wetlands in Central America for migrating waterfowl.  Species that inhabit the park include roseate spoonbill, white ibis, great egrets, wood storks, boat-billed heron, northern jacana, and much more.  In addition there are scarlett macaws, long-tailed manikin, great curassow, and several species of parakeets.

Though Palo Verde is a national park, it is administered by the Organization of Tropical studies.  The park is open daily from 8 AM – 4 PM.  There is a ranger and administration station with public restrooms.  The entrance fee for Palo Verde is $12 per person.  There are basic overnight accommodations which are suitable for field biologists, though most visitors take day trips from hotels in Tamarindo, Flamingo or Papagayo.

The easiest and best way to visit Palo Verde is with a tour operator that knows the way.  It will not only be a more enlightening and easier experience, but it will likely cost less in the end as well.  The park is remote and requires driving an hour or so on dirt roads with limited signs.

Palo Verde is located in the tropical dry forest of Guanacaste, which is one of the hottest and driest climates in Costa Rica.  Day time temperatures often exceed 90 degrees and night time temperatures are normally in the mid-70s.  This area receives an average of 1,600 mm or 63 inches of precipitation annually. The driest months to visit are November through August.

Fun Fact: Palo Verde National Park is located in a tropical dry forest.  These forests are considered to be the most endangered ecosystems in the tropics, providing essential habitat to many endangered species of wildife.