Puerto Jimenez is a genuine rootin tootin frontier town located on the Osa Peninsula. The pueblo itself is divided on a grid of dusty dirt roads where one will find a wide variety of bars with a modern day saloon feel. Of course, there are also plenty of little sodas (mom and pop restaurants) and little shops. Most people travel to Puerto Jimenez on their way to Corcovado National Park and use it as a place to fill their canteen or stock up on supplies. The town is the last piece of civilization before entering into one of the worlds wildest jungles. 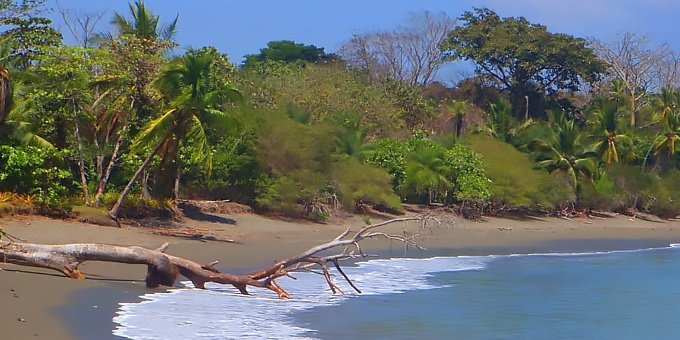 The history of Puerto Jimenez is consistent with the feel. Originally the town was settled around 1914 and was nothing more than a few houses clustered in the middle of a mangrove swamp. In the 1960s logging operations began to move into the forests of the Osa Peninsula, cutting down valuable hard woods. In doing so, they discovered gold in many of the small streams, which led to a genuine gold rush and soon after, the growth of Puerto Jimenez. It was not long before the gold rushers destroyed these stream beds and thus the environment around them, so the Costa Rica government intervened by establishing Corcovado National Park to protect the land and wildlife.

There are 3 ways to access the park from Purto Jimenez; the first is to continue driving south on the peninsula to the Carate entrance. The second is the Los Patos entrance which is located north of Puerto Jimenez in the town of La Palma. This trail will lead you all the way to the Sirena Ranger station and through the heart of Corcovado. The final entrance is to the El Tigre Station, but the trail does not go far into the park.

Aside from Corcovado, there are plenty of things to do in Puerto Jimenez. The sport fishing on the Golfo Dulce is spectacular. Record billfish are caught every years by anglers in these waters. Kayaking is great in the mangrove estuaries around town, especially on the Rio Plantanares. The nearby Playa Plantanares is a great place to catch some rays on a secluded beach.

Fun Fact: The Osa Peninsula is one of the most remote areas of Costa Rica. There is a small domestic airport in Puerto Jimenez which will save many hours driving to get here.